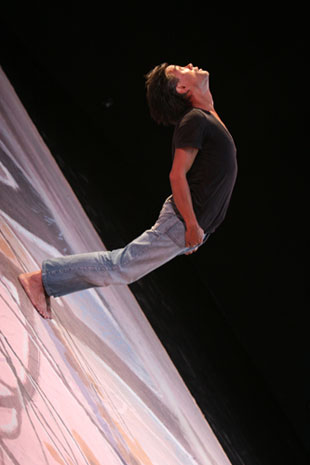 CREATION on 15 April 2008, within the framework of Concordan(s)e Festival in Bagnolet

When there are no words, the body is still there. A body disembodied. To make an autististic person dance – dancing with him, dancing him – is searching from outside the being who is inside; this is what I have tried to achieve when meeting each one of the four teenagers since July 2007. Often, Marie and Benjamin, or Patrice, were there. It is said those bodies can’t make gestures, yet gestures come from everywhere. Gestures that give life to a body. A wink, a sigh, vibrating muscles, a shaking ankle, rising toes. I had never seen before, while working with autistic persons, so many gestures, so beautiful gestures: nervous gestures, clear lines in the space or broken movements, slowness or motionlessness, awkward arabesques, curled torsions, short-lived forms, arms or legs torsions. Arms like wings, bust swinging, fingers showing off from the hand or a head rolling from one shoulder to the other. A place in the world.