As regular as clockwork

« (…) and then, the creation of musician Benjamin Dupé, thanks to which one enters the set of the Merlan theatre by the artists’admittance before curling up on rush mattings, in semi-darkness. In the middle of a square stage, sand and delicate floating fittings are at the heart of Ghost, light rolling and on the taut skin of our eardrum. Very softly, the audience let themselves be surprised and overcome by the universe composed by Benjamin Dupé using electroacoustic sounds, recorded voices or remote controlled resonant objects. As with the flapping of a butterfly effect, filtered lights echo a choreography of rubbed strings, heady bips, splintered water drops or rice cascades. The vibrations and pulsating tell a story while tension rises little by little toward an orgasmic storm, a sound tempest, a luminescent, fantastic wave. But the crafty composer also contrives silent moments and suspense. A bit too much at times, yet we willingly remain in the mood and inhabit the abstract landscapes of this descent to Hades full of mellowness. »

« (…) Starting with the very beautiful, poetic and intimate sound installation of Benjamin Dupé. In the small hall of the Merlan, during three days, groups of about thirty people sat on a stage meticulously arranged by Olivier Thomas. Everywhere, resonant objects. Soft, rolling, blowing, vibrating, that we can see vibrate. Shocks are murmurs occupying the silence, the sound show is magic, as if the spectators, together, lived in a new instrument. Balls are rolling, sand is flowing out unveiling writings, the light subtly guides where to look. Then footsteps appear on the sand, a voice can be heard, telling Eurydice’s journey, Orpheus’s curiosity, his breaking up. The lights go out, one unwillingly leaves the set where sound was born under our eyes. Then we realize, stunned, the incredible mechanical performance of this small world, in which each sound phenomenon required skilful pottering, arts and crafs invention, thorough adjustment so that the whole thing works to the nearest second, the nearest millimetre… » 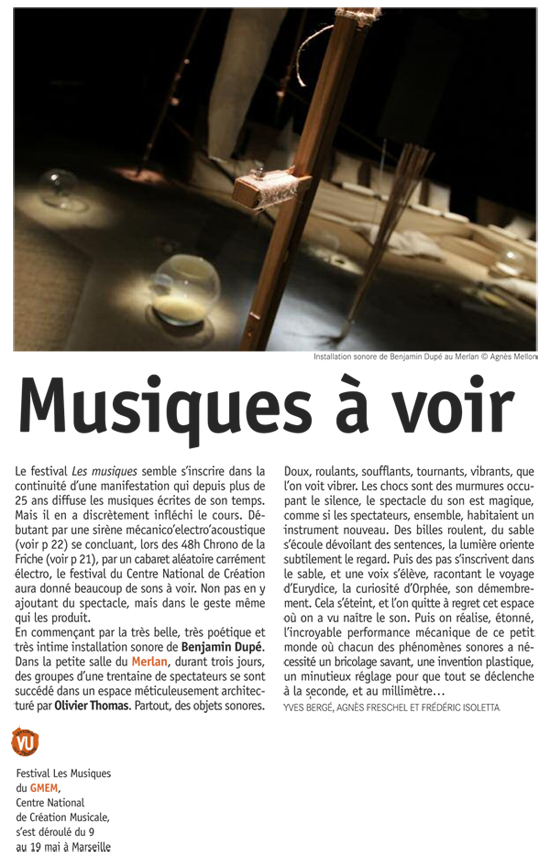