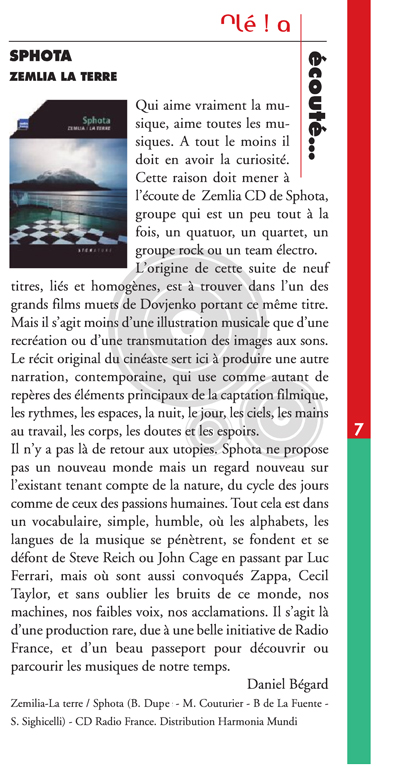 The one who really loves music, loves all kinds of music. To say the least one must be curious about them. That is why one should listen to Zemlia CD by Sphota, a group who is a bit of everything, a quartet, a rock group or electro team. The origin of this suite of nine titles, linked and homogeneous, lies in one of the great silent films by Dovjenko, bearing the same title.But it is less an illustrative music than a re-creation or transmutation of pictures into sound. The original script of the film maker helps produce another narrative, a contemporary one, that takes as landmarks some main elements of the film, rythms, spaces, night, day, skies, working hands, bodies, doubts and hopes.

There is no return to utopias. Sphota does not propose a new world but a new outlook on what existed, taking into account nature, the cycle of days as well as the one of human passions. All this is set in a vocabulary that is simple, humble, where alphabets, music languages communicate, melt and detach themselves going from Steve Reich or John Cage via Luc Ferrari, summoning Zappa, Cecil Taylor, and also mentioning the noises of this world, our machines, feeble voices, ovations. We have here a rare production, thanks to Radio France, a beautiful passport to discover or go through the music of our time.